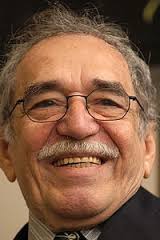 ONE of the most-read bestselling authors of novels in Spanish, Gabriel García Márquez has died at the age of 87.

‘Gabo’, as the Colombian writer is known to friends and family, was recently treated in hospital for a lung and urinary infection and severe dehydration, which turned out to be pneumonia, but was discharged and believed to be on the mend – even though his sister Aída said she had ‘prepared herself’ to ‘accept God’s will’ if her brother did not recover.

The 1982 Nobel Prize winner, whose iconic works include A hundred years of solitude, Love in the time of choleraand In the evil hour was initially hospitalised in México City, where he owns a house and has lived as an expatriate for most of his married life.

He was said to be in good spirits and progressing well, even jokingly telling reporters at the hospital doorway to ‘go off and do their jobs’.

Rumours abound at first that his lymphatic cancer, diagnosed in 1999 and cured after three months ofchemotherapy, had come back with some even claiming it had spread to his lungs, glands and liver, but this turned out not to be the case.

Although the most famous of Gabo’s works is undoubtedly A hundred years of solitude – written in 1967, based upon the life of his own ‘Granny Mina’, Tranquilina Iguarán Cotes and translated into 35 languages – his Anglo-Saxon fans and those from Spain will perhaps have better memories of Love in the time of cholera, which starred ‘Bond villain’ and husband of actress Penélope Cruz, Spain’s Javier Bardem.

Centring on nearly 52 years in the life of a late-19th and early-20th century man who waits his entire life to be with his beloved – through cholera, the symptoms of which are ‘similar to those of being in love’, her marriage, his own affairs and civil war and unrest – the film was premièred at the Rio de Janeiro festival in 2007, and was based upon the early courtship of Gabo’s own parents, Luisa Santiaga and Gabriel Eligio.

It was shot mostly on location in the Caribbean coastal city of Cartagena de Indias in northern Colombia, close to Gabo’s birth town of Aracataca, but also on the river Magdalena in Mompox, and in Santa Marta.

Some scenes were filmed in the Caribbean city of Barranquilla, where Shakira – dubbed once by Gabo as the ‘essence of a true Colombian’ – was born.

Shakira, who currently lives in Barcelona with footballer partnerGerard Pique, worked on the soundtrack to Love in the time of cholera together with Argentinian musician Pedro Aznar.

Songs included Hay amores, Despedida – which was nominated for a Best Original Soundtrack Golden Globe in 2008 – and Shakira’s ownPienso en ti (‘I think about you’), from her 1995 album Pies descalzos (‘bare feet’).

He was, himself, a journalist and scriptwriter, as well as being a radical social and cultural activist and being credited as the ‘father’ of the literary ‘magical realism’ movement.

Gabo was famously quoted as saying, in 2012, that he wished the whole world was run by socialists and expected that one day, this would be the case.

A language revolutionary, he frequently called for grammar and spelling rules to be axed across the board.

Although entirely Colombian by birth and by blood, Gabo owned homes in Paris and México City, and lived in the latter for most of his adult life after marrying his childhood sweetheart Mercedes.

He had joint Colombian-Mexican nationality.

Colombian president Juan Manuel Santos wrote on his Twitter site: “A thousand years of solitude and sadness now that the greatest Colombian of all time has died.”

Presidents from all over Latin America have made their condolences public, and in Spain, socialist leader Alfredo Pérez Rubalcaba wrote on Twitter: “Gabo has died. My favourite author, and that of millions of other readers.”